... is a German automobile group, and has been one of the top manufacturers of premium cars and sports cars for several years. The car manufacturer has over 88,000 employees. It delivered almost 1.9 million vehicles and generated revenues of around EUR 60 billion in the 2017 financial year.

One of the group’s factories is using a special spring-loaded heavy-duty castor for frames which are used to hold automobile components. A different plant intended to use this castor for a similar purpose.

For a variety of reasons, the company’s technicians wanted to make a few changes to the wheel lock system of the castor to optimise it for the new application. One of their aims was to reduce the significant cost of repairing their existing frames, as the castors which they were using frequently collided with the fork when they were moved with forklifts due to their large collision circle. The wheel brake lever also stuck out quite far when open, which had the potential to cause an injury when used at the other factory. There were also difficulties releasing the wheel lock. The lever had to be pushed upwards, which employees found difficult to do due to the safety shoes they were required to wear. This also frequently caused damage to their shoes.

We decided not to shorten the existing brake lever, as this would have made the wheel stop even more difficult to use. Blickle engineers used a different design for the brake unit in order to decrease the collision circle by 65 mm. The brake lever is now released from the top down, making it much easier and quicker to operate. 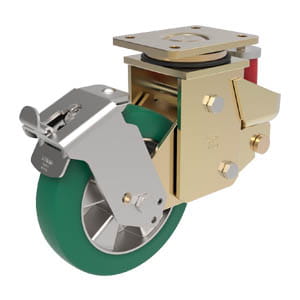 By switching to the new castor and optimised brake system, the client has dramatically reduced their repair costs by decreasing the amount of wear on their equipment and safety shoes. The new system is also extremely safe. Ergonomic conditions at the workplace have also been improved because the pedal can be operated quickly and easily.