... is a company headquartered in Ireland that provides creative and technical solutions for fi lm and television projects worldwide. Unlike other fi lm agencies, the company primarily develops physical prototypes that fi lm production companies can use for special effects.

An American film production company needed three different tanks to produce a World War ll film. Original tanks are not available, they are either in possession of collectors or museums and so prototypes had to be developed that appeared as authentic as possible. For a film production over several days and at different locations, the tanks had to be stable, easy to transport and quickly assembled. Not only the weight and easy handling for assembly played a role in the selection of the wheels, but also the tread and the wheel centre. As the wheels are used on a chaindrive, the tread should have a very good floor preservation, low-noise operation and ensure a high operational comfort. The wheel centre should be resistant to dirt, shocks and impacts to use the tanks on different places with different floors.

Our solution from the standard range 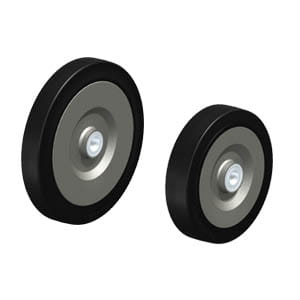 The film agency produced a duplicate of the tank “Panzer lV”, which was the most important German tank in World War ll. The design has been developed from the ground up to get the most authentic and functional machine possible. The entire tank is made of many interchangeable components, so the whole system can be easily transported and assembled within four hours on site. For the chain drive, heavy duty wheels with elastic solid rubber tyres “Blickle EasyRoll” have been proposed. Thus, the low-noise operation and the high operational comfort are guaranteed. The welded steel wheel centre is also resistant to dirt, shocks and impacts.

The tests with the prototype tanks were very satisfying for the customer. The Blickle wheels have not only met the requirements, but also fit perfectly into the design.