Flexible and safe on rails or road

… is a major Swiss manufacturer of fire brigade vehicles and motorised spray systems. In the 30+ years of its existence, the company has delivered more than 900 vehicles. Since its founding, the company has been assembling vehicles in renowned Swiss quality at its site in Recherswil. 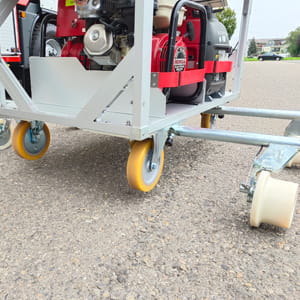 The customer previously purchased and used finished undercarriages for roller containers. Since the end customers wanted more flexibility and additional functions, the vehicle manufacturer developed its own undercarriage for the existing equipment platform.

One important consideration during planning was that almost exclusively military fire brigade personnel are in service in Switzerland. Due to the lack of opportunities for practical experience, the equipment must be as simple as possible and yet must still be very robust. Another difficulty was encountered in the varied conditions at the different deployment sites. In rescue operations, different requirements are placed on the undercarriage than for extinguishing equipment – and conditions in the city differ from those in rural locations. In addition, the undercarriage of the roller containers had to be adapted for use on rails and for self-braking when not in use. 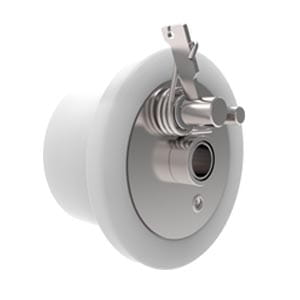 The base undercarriage developed by us consists of two swivel castors of the L-ALTH series and two fixed castors with integrated dead man’s brake from the B-GTH series. The castors are fitted with a polyurethane tread Blickle Extrathane®.

After detailed discussions with the customer, the Blickle engineers additionally designed the suitable flanged castors to enable safe use on railway rails: The flanged wheels of the Blickle wheel series SPKGSPO of high-quality compressed cast nylon are mounted to the trolley undercarriage, which can be extended to make the rolling containers fit for travelling on rails, if necessary. Thanks to the pretensioned, integrated drum brake with dead man system on two of the four flanged wheels, the trolley will only move after the brakes have been actively released by the firemen. When not in use, the system locks up by means of an integrated spring, which ensures the braking performance. This principle functions both for the fixed castors of the base undercarriage (when the flanged wheels are not extended) and for the extended undercarriage with the self-braking flanged wheels.

The closed bracket design of the brake systems also largely protects the brake shoes from corrosion and dirt. This ensures that braking performance remains consistent regardless of moisture and road contamination in the area.

Extensive testing of prototypes proved that Blickle’s design is more than capable. The customer is very satisfied with the new undercarriage, which will make a strong showing on the market. Future undercarriages will now be equipped exclusively with Blickle castors – if necessary also with additional Blickle flanged wheels with dead man’s brake for rail use.