In its second generation of robots, a warehousing specialist still relies on Blickle precision wheels

... invented and continues to develop its automated storage and retrieval system, used by well-known brands around the world. The company is one of the 500 largest businesses in Norway and has branches around the globe.

The customer has developed an automated storage and order picking system. The goods are stored in plastic boxes and picked by robots which run on a rail system. The robots have a rectangular outline and are equipped with a total of eight wheels. Four wheels are always positioned in the direction of travel and four in the transverse direction, all of which can lower or rise. The rail system is arranged like a chess board and requires a high level of precision for the wheel suspension and the wheel geometry.

The new robots utilise a more advanced drive system that places additional requirements on the wheels. 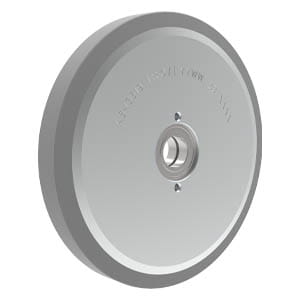 The new drive wheels are equipped with a tread made of the antistatic polyurethane-elastomer Blickle Besthane®. In comparison to Blickle Extrathane®, this material has a lower starting and rolling resistance and is also suitable for higher speeds and accelerations.

In contrast to the previous generation of robots, all four wheels running in one direction are now connected to a motor. The four-wheel drives produce better force transmission to the rails during starting and braking, which enables higher rates of acceleration without risk of the wheels slipping. The geometry of the aluminium wheel centre has been perfectly adapted to the application, ensuring that the wheel runs perfectly on the rail system.

The new wheels with Blickle Besthane® tread are designed for higher speeds, making the new robot generation compatible with the optimised drive system.

Thanks to the low starting and rolling resistance, the robots require less energy to operate, saving money for the customer.