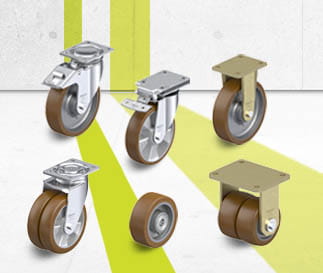 Alongside Extrathane®, Softhane® and Besthane Soft®, Besthane® is one of the four polyurethane treads developed by Blickle. The company drew on its many years of experience working with polyurethane to develop the optimal formula for every tread type in order to create different wheel series with different properties. Besthane® treads have 40% lower rolling and swivel resistance than the other polyurethane treads. This means that much less force is required to push or pull transport units carrying heavy loads. It also makes the series particularly interesting for customers focused on ergonomics and occupational safety. Besthane® tread also provides a particularly high level of dynamic load resistance, which is particularly useful when transporting sensitive materials. The tread is typically used for a variety of heavy duty applications on different transport units and machines in the machining and automotive industry. It can provide a load capacity of up to 12,000 kg at high speeds of up to 16 km/h. The Besthane® series also covers a huge range of wheel diameters of up to 1000 mm. Besthane® is also used on the GBN series of drive wheels with hub keyway, the GBA series of hub fitting wheels and the GSPOB series of hydrolysis resistant cast nylon wheel centres. 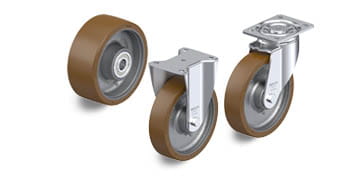 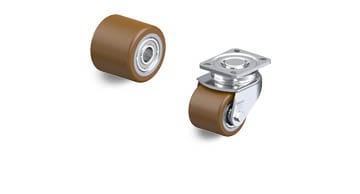