Absolutely reliable – even at high seas

… is an American marine robotics corporation that designs, manufactures and sells the Wave Glider, a wave and solar powered unmanned surface vehicle.

Wave gliders are mostly used on the high seas for long duration data collection and transmission, where other platforms such as ships or islands are not or only temporarily available. For example, wave gliders are used in particular by research institutes to track ocean pollution, temperature and salinity changes; oil companies; as well as by armed forces, amongst other things for Military Intelligence sensor platforms. The cradles for the unmanned vehicles are used both on land and on ship decks. The customer had tried a variety of castors, but all failed extremely early. The combination of Arctic temperatures, tropical sun and frequent immersion in salt water has greatly afflicted the castors. The use on the often very rough, high abrasion causing ship decks has led to premature product failure.

The solution from our standard range 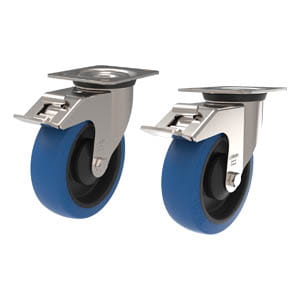 Engineers at Blickle USA, working with engineers and product managers in Rosenfeld specified LEX-POBS 125XKA-FI and LEX-POBS 160XKA-FI as the optimal solution for this application. The hydrolysis-resistant high performance tread Blickle Besthane Soft® and the black nylon core are unaffected by the sun and abrasive decks, while the stainless steel ball bearings with rubber sealing (2RS) and stainless brackets have a good resistance against corrosion. The Blickle “stop-fix” brake prevents the cradle from moving even on a pitching ship deck.

The customer tested these castors on prototype stands in the most abusive circumstances that the application sees. The hydrolysis-resistant Blickle stainless steel castors withstood all tests with flying colours and thus received approval for series production.