... is a middle market Swiss company that produces food serving trolleys. The trolleys are used in commercial kitchens and nursing homes as well as for banquets or meals on wheels. Serving trolleys with induction technology that perfectly maintains the temperature of cold and warm dishes are a speciality of the company.

One version of the serving trolley sold to a large Swiss university clinic is equipped with Progressus castors. Wheels and castors of the Progressus brand have been part of the Blickle Group since 2014. The university clinic was exceptionally pleased with the Progressus castors. Because the serving trolleys will in future run through a fully automated washing line, it was necessary to make a technical modification to the swivel castors: The castors must not turn while in the washing line; otherwise, the system could become jammed up. The customer therefore approached Blickle with the request to additionally outfit the Progressus castor with a special directional latch. 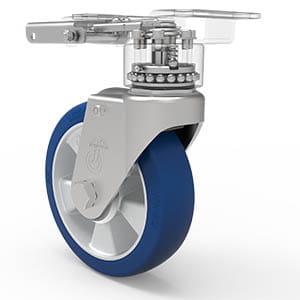 The previous model with sealed swivel head served as the basis for the new swivel castor, which was upgraded with a directional latch. The unique aspect is that the latch locks the swivel head by default. When travelling straight, as is the case in the washing line, the swivel castors are fixed in position. To make it easier to operate the trolley at other times, however, the swivel head is released with even a relatively slight sideways application of force: The latching torque is overcome already at 2.5 to 3 newton-metres. This makes it easy for the staff to steer the trolley while also satisfying the safety requirements of the washing line. Technically, the latching torque requested by the customer was implemented with a “slot and key principle”. A slot was set into the upper swivel head ring. A ball situated beneath a spring serves as counterpart to the slot. The spring presses the ball into the slot, blocking the swivel head of the castor. If a torque of 2.5 to 3 newton-metres is applied to the swivel head, the ball is pushed up and out of the swivel head ring, compressing the spring. This disables the latching function.

By modifying the existing swivel castor, it was possible to offer the customer an economical custom solution based on standard components. As a result, we were able to implement the solution quickly and inexpensively. The university clinic has relied on serving trolleys with Progressus castors for over 20 years and is pleased to have a resilient and reliable premium product with Blickle know-how.